Doing Business at the Speed of Molasses 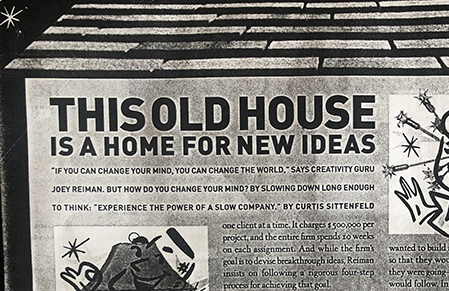 While working at Chronicle Books, my boss would often leave zerox’d copies of magazine or newspaper articles on my chair with a small post-it and usually a short comment in her tiny, distinct handwriting. “Inspiration! —VR”

There was one such article that spoke to me at my core. I was in my 20s. This was only my second job out of college—not much life experience under my belt yet—but something about this article rang deep and true for me. So, I saved it.

When I started my own graphic design business, I hung the slightly worn copy on the wall in my home office above my computer where I could see it all the time.

As my business grew and my physical office space changed, I put the article away in a green hanging file folder with other items I wanted to read and save.

As life (and the internet) got faster and faster, I found myself thinking back to that article more frequently. For the past several years, I’ve been quoting one line from the article regularly—“doing business at the speed of molasses.” I couldn’t locate my copy anywhere. I couldn’t remember who wrote the article, what magazine it had been in, or even the name of the business and entrepreneur it featured. I tried Googling the concept and phrases from it, but it must have been published before Google was really a thing.

And then, a few weeks ago, while looking for sticky photo squares, I opened a drawer in my office and sitting there right on top was that green hanging file folder. Oh my god, there it is! The dog wondered why I was so excited and who I was talking to.

The magazine didn’t include its masthead in the footer (note to magazine designers out there), so I still don’t know who published it, but the concepts ring just as true now as they did back in 1999. The examples might be dated, but the ideas are the same. And, somehow…maybe the newness of the speed with which we can do things on the internet has worn off? maybe it’s due to a global pandemic shut down?…it seems to me that more and more people I talk to are craving and buying into this “new” way of thinking…here is some of the best advice I’ve ever read on creativity… 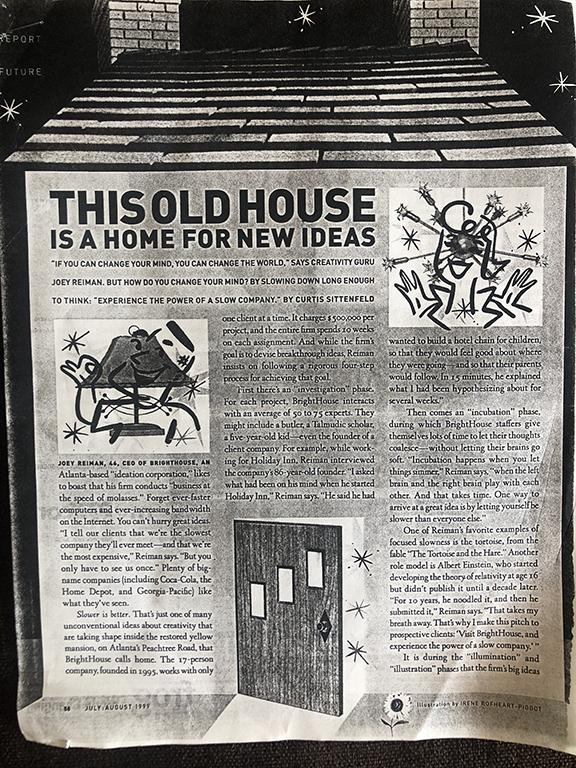 This Old House is a Home for New Ideas

Joey Reiman, 46, CEO of BrightHouse, an Atlanta-based “ideation corporation,” likes to boast that his firm conducts “business at the speed of molasses.” Forget ever-faster computers and ever-increasing bandwidth on the Internet. You can’t hurry great ideas. “I tell our clients that we’re the slowest company they’ll ever meet—and that we’re the most expensive,” Reiman says. “But you only have to see us once.” Plenty of big-name companies (including Coca-Cola, the Home Depot, and Georgia-Pacific) like what they’ve seen.

Slower is better. That’s just one of the many unconventional ideas about creativity that are taking shape inside the restored yellow mansion, on Atlanta’s Peachtree Road, that BrightHouse calls home. The 17-person company, founded in 1995, works with only one client at a time. It charges $500,000 per project, and the entire firm spends 10 weeks on each assignment. And while the firm’s goal is to devise breakthrough ideas, Reiman insists on following a rigorous four-step process for achieving that goal.

First there’s an “investigation” phase. For each project, BrightHouse interacts with an average of 50 to 75 experts. They might include a butler, a Talmudic scholar, a five-year-old kid—even the founder of a client company. For example, while working for Holiday Inn, Reiman interviewed the company’s 86-year-old founder. “I asked what had been on his mind when he started Holiday Inn,” Reiman says. “He said he had wanted to build a hotel chain for children, so that they would feel good about where they were going—and so that their parents would follow. In 15 minutes, he explained what I had been hypothesizing about for several weeks.”

Then comes an “incubation” phase, during which BrightHouse staffers give themselves lots of time to let their thoughts coalesce—without letting their brains go soft. “Incubation happens when you let things simmer,” Reiman says, “when the left brain and the right brain play with each other. And that takes time. One way to arrive at a great idea is by letting yourself be slower than everyone else.”

One of Reiman’s favorite examples of focused slowness is the tortoise, from the fable “The Tortoise and the Hare.” Another role model is Albert Einstein, who started developing the theory of relativity at age 16 but didn’t publish it until a decade later. “For 10 years, he noodled it, and then he submitted it,” Reiman says. “That takes my breath away. That’s why I make this pitch to prospective clients: ‘Visit BrightHouse and experience the power of a slow company.’”

It is during the “illumination” and “illustration” phases that the firm’s big ideas really come to life. For one recent project, involving Coca-Cola’s presence at Turner Field (home of the Atlanta Braves [until 2016]), the goal was to improve upon billboard advertising. BrightHouse analyzed the architectural drawing of the stadium, found an area that no one was using, and built Sky Field—a 20,000-square-foot experiential park, complete with mist, picnic facilities, and million-dollar prizes for catching a ball.

Back in 1995, Reiman and his team helped the giant fragrance house Coty Inc. to create “ghost myst”—the first perfume to embrace values and spirituality (“inner beauty” rather than physical beauty) as the focus of its market positioning. Ghost myst became the best-selling fragrance of 1995, and it launched a spirituality-in-beauty movement that many other fragrance and cosmetics companies have rushed to join.

In 1996, the Professional Photographers of America Inc. (PPA) came to BrightHouse with a problem. Its members were losing business to outlets like Wal-Mart, which churned out photos far more cheaply (if much less artificially) than PPA members did. BrightHouse recommended that PPA reposition itself as a cadre of storytellers. Since then, the rate at which consumers ask the organization for photographer referrals has more than tripled.

“If you can change your mind, you can change the world,” Reiman says. “Before you can be creative, you must be courageous. Creativity is the destination, but courage is the journey.”

Slow and steady. Creative solutions take time. Give yourself time to investigate, incubate, and illuminate. Reach out if you want to collaborate! I’ll be filing this zerox copy again, but at least now I’ve got it here for safe keeping.