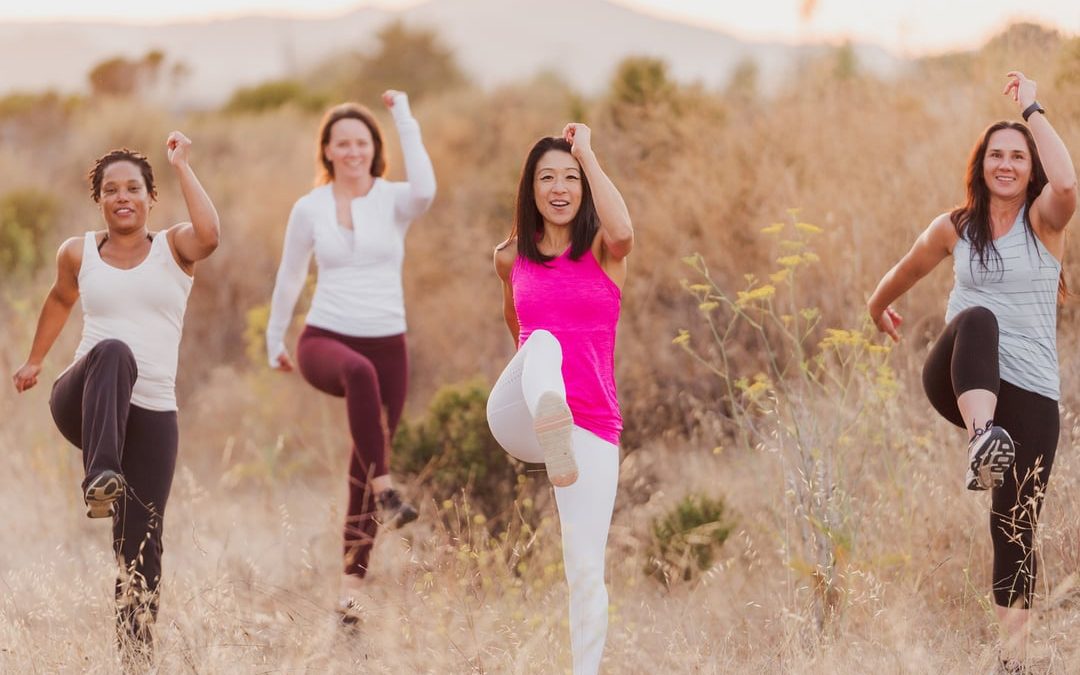 I’ve written about Grace before, but you may not have known who I was talking about, so I wanted to tell you a bit more about her. Starting with, she’s someone you want to know.

Grace Yu tender-hearted woman, willing to be open and vulnerable in front of her entire class.

To introduce you to my friend, my dance, fitness, yoga teacher, brilliant entrepreneur, a woman who’s strength I admire, I have to start with a story.

I met Grace in 2016 at a community dance class at the Athleta store in Corte Madera, CA. After pushing racks of clothes to the edges of the room, Grace taught us fun upbeat choreography to Meghan Trainor’s Dance Like Your Daddy. The speakers in the store weren’t working perfectly, and the music stalled a couple times, but Grace never missed a beat. She kept going. She laughed and led us through it. Not because she didn’t care, but because she did. She was going to give this class everything she had. I knew then that this wasn’t an ordinary woman. I knew I needed to meet her. So, after class I waited to introduce myself. I told her—before I’d told my children or my friends—that I had just learned that I had early stage breast cancer and I wouldn’t be able to come to her class again for a little while, but that I would DEFINITELY be back. I likely overwhelmed her with my over-sharing (typical me), but she just looked me right in the eyes and gave me a great big hug…and then proceeded to shower me with Athleta shop cards. Generous Grace.

In 2020, Grace’s business acumen revealed itself. A former kindergarten teacher, Grace turned her creation (Stop Drop and Dance) into the joy, connection, and release that so many people (including her) needed in those first few weeks of the pandemic. Testing tech to get the best live-streaming experience, adding an in-person option to her live-streaming success, creating an easy to navigate and beautiful website, remodeling her garage to become her film stage, adding fitness classes, pre-recorded and on-demand options, and a membership component…you’d think she had a full team working for her, an IT, video, and editing department, content creators, and social media managers, but it all came from Grace.

I’m not sharing this to make the rest of us feel bad about where we are in our business journey. Quite the contrary. You are right where you’re supposed to be. This is, however, intended to show an example of what’s possible—an example of what SHOWING UP FOR YOUR PEOPLE can look like. And how in the blink of an eye, your business can become essential to your clients.

But let me back up a bit…

With a sister seven years older, Grace was an elementary school girl who thought it was normal for a 10 year-old to spend her time alone working out to Jane Fonda’s Workout on VHS (the original Buns of Steel). She wanted to be just like her sister after all. Growing up as an “80s baby” Grace also thought it was “totally normal for people to break out in synchronized dancing.” Anywhere. It wasn’t until junior high school dances that she realized “people just didn’t do that.”

After college, Grace became an elementary school teacher in Cupertino, CA, teaching 1st grade and Kindergarten. During those first years of teaching, she started doing yoga classes and going to the gym in the evenings as a way to decompress after a long day with 33 (!) 5 and 6 year-olds.

After a couple years of attending classes, Grace did the training and became certified to teach both yoga and fitness. In talking to her about this time in her life, she semi-joked, “I loved teaching adult classes at night because I could give a direction ONE TIME and everyone in the class would automatically do it.” Quite a bit different from her day job.

In Grace’s 9th year of teaching Kindergarten and 1st grade, she was put on emergency bed rest in the third month of her pregnancy with her oldest daughter. Her elementary school teaching career abruptly halted. With a move to Southern California for her husband’s one-year medical fellowship and a new baby in her arms, Grace decided to prioritize her family and chose to focus on teaching yoga and fitness instead of going back to elementary school.

Grace grew up as a dancer, competing and being on dance crews. While she chose elementary education as her post-college profession, her love for dance and her desire for everyone to “suddenly dance in sync” never waned. During those early years in dance, “the culture was all about the mirror and having everything perfectly in sync, down to each finger.” In her 30s, Grace wanted to get back to what dance really was for her—“synchronized fun…maybe not even synchronized…just fun!” She wanted to create a way for people to enjoy dance without feeling self-conscious (like in front of a mirror) or have ego (like in the club scene).

After settling back in Northern California, Grace became a regular, popular teacher at Marin Power Yoga (MPY). Her Gentle Yoga classes were actually my first foray back into yoga after my 2016 breast cancer surgery. Her open sharing at the beginning of class, hands-on adjustments, and beautiful quotes read during the final shavasana, were salve for my mind, body, and spirit.

Grace infused that yoga practice—introspection, openness, inspiration—into her dance and fitness classes. Her signature class named Stop, Drop and Dance (remember that 80s kid who thought people stopped everything to dance in sync) brought joy and healing to me after a rough patch. And, I wasn’t the only one. That class, held on Tuesday and Thursday mornings would often cause traffic and parking jams across downtown San Anselmo. The combination of cardio, choreography, and great music was addictive in all the best ways. As a neighborhood location, MPY’s doors had to remain closed during Grace’s classes to avoid complaints about the loud music, so the windows would steam up, but the dancers, covered in sweat, would still leave smiling. Grace encouraged community in all of her fitness, yoga, and dance classes. “Take a moment to introduce yourself to someone you don’t know” built friendships, warm smiles, new friends, and real community.

With the vision to recreate the 3-hour Stop Drop and Dance-a-Thon she hosted in honor of her March 2019 birthday, Grace formed her own business in January 2020.

The Power With Grace.

And then, in the blink of an eye, we were in a pandemic.

What happens when you show up fully and strive to give your very best to your customers? Well, those customers become family. Grace went into the Shelter-in-Place and Covid-19 pandemic with a strong following. Grace’s classes—dance, yoga, fitness—were a place people often sought out when they needed some kind of relief, some kind of healing. She taught her final in-person dance class on Thursday, March 12th, 2020. Friday, March 13th the schools in Marin County closed and everyone was instructed to pick up their yoga mats from the studio. On Sunday, March 15th, Grace held the first Zoom version of Stop Drop and Dance.

Grace was the business owner who was faced with the decision to pivot and didn’t think twice. Once again, she didn’t miss a beat. She dove head-first into Zoom, Vimeo, live-streaming, microphones, speakers, headsets all while dancing in her living room with her two young daughters backing her up (they wore matching outfits in those early days which of course made me both laugh and cry). On mornings when Zoom at home school was in full swing, only Grace’s youngest daughter was able to bounce alongside her, sometimes sporting tutus or sunglasses (the matching outfits got slightly less coordinated as the months of dancing via Zoom ticked by).

And that community that Grace had spent years building…that community showed up. Day after day, week after week. To support her, but mostly because we needed her and each other. I danced in my bedroom with my laptop propped up on stacked pillows with my camera turned on. I wanted to see my fellow classmates even if I couldn’t grab coffee with them after class. I wanted to show up and have them, and Grace, see me too. We had to be physically apart, but at least we were still dancing together.

Grace’s family has been with her every step of her 2020 journey. Her parents join her dance classes each session—her dad often sound-checking or giving video tips before and after class. I’ve adored dancing with them. In the early months, her dad would spend hours helping her figure out and resolve issues as her dedicated “Zoom person.” Grace’s big sister, who hasn’t been as into exercise as her baby sister (maybe Grace stole all those Jane Fonda tapes) has joined all of Grace’s dance classes from afar during the pandemic. Grace’s precious girls, when not busy showing up for Zoom or in-person school, are the BEST backup dancers, registration table clerks, girl scout cookie sellers, and strong sisters any CEO mom could ask for. Grace’s husband, James also goes back to work like his wife after their daughters go to bed, but together they track their activity and sleep like athletes to make sure they are getting enough of both. And they know the importance of family, so they make a point to schedule “get away time” every couple of months that is dedicated time to connect.

One important side note. If you follow my Instagram stories, you know that fitness is important to me. It’s one of my primary stress relievers. But Grace’s fitness classes are no joke. Her TRX classes at Marin Power Yoga were rumored to be the hardest. (Evidence: My husband couldn’t walk for several days after attending one.) Grace makes things seem possible! She does handstands like an Olympic gymnast. She braved her fear of open water not by spending more time at the beach or taking a surfing lesson, but by signing up for the Escape from Alcatraz Triathlon in the chilly San Francisco Bay. After showing up day-after-day for months of training with her bestie birthday twin Lizzy Poppe, together they jumped off a boat in the Bay and swam 1.5 miles to shore, facing fear, strong currents, and freezing water. And then they kept going and smiled the remainder of the way through the 18-mile bike ride and 8 mile run. I was there on the beach cheering them onto the sand. I saw them cross that final finish line. It brought me to tears (okay, I know that’s easy, but you get the picture). In case this post paints Grace in a soft light, I want you to know that behind her kind heart, she’s a serious badass.

And because of her grit, determination, strength, all of it, Grace perseveres beautifully. A self-proclaimed workaholic, Grace may not see it that way. She was honest about her frustrations with the limitations of technology. She strives to give her very best in everything she does. She knows she needs to get a bit more sleep. But, when faced with technical, location, personal, or other challenges, she pushes through—The Power. And, she knows that if this online experiment, her new business, or her next adventure stumbles, that her community and her family would understand, and most importantly, she would know that no matter what the outcome, she always showed up, tried, and gave it her all—With Grace. 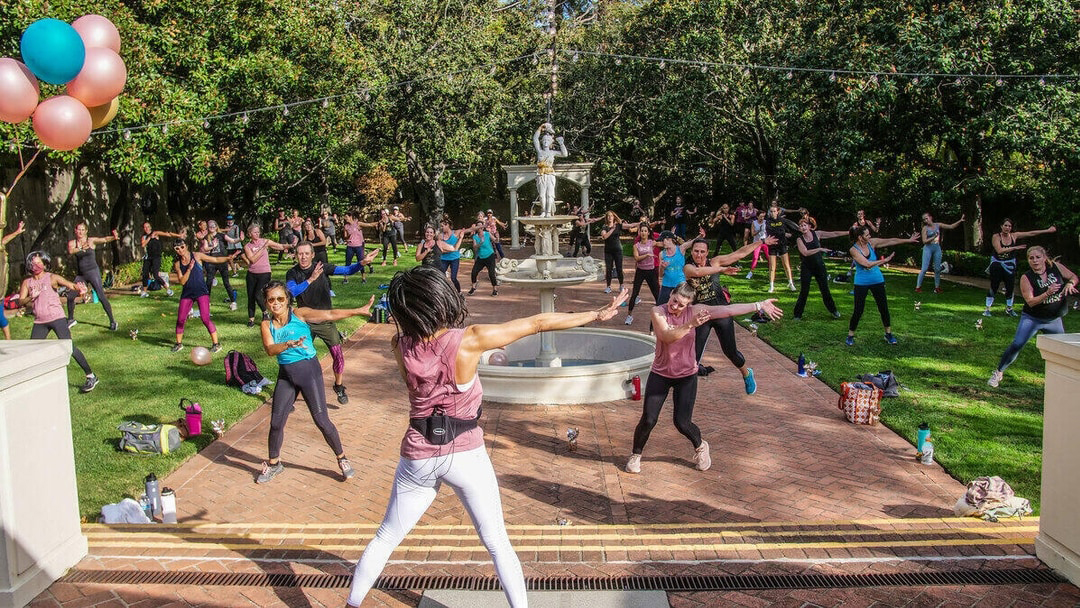 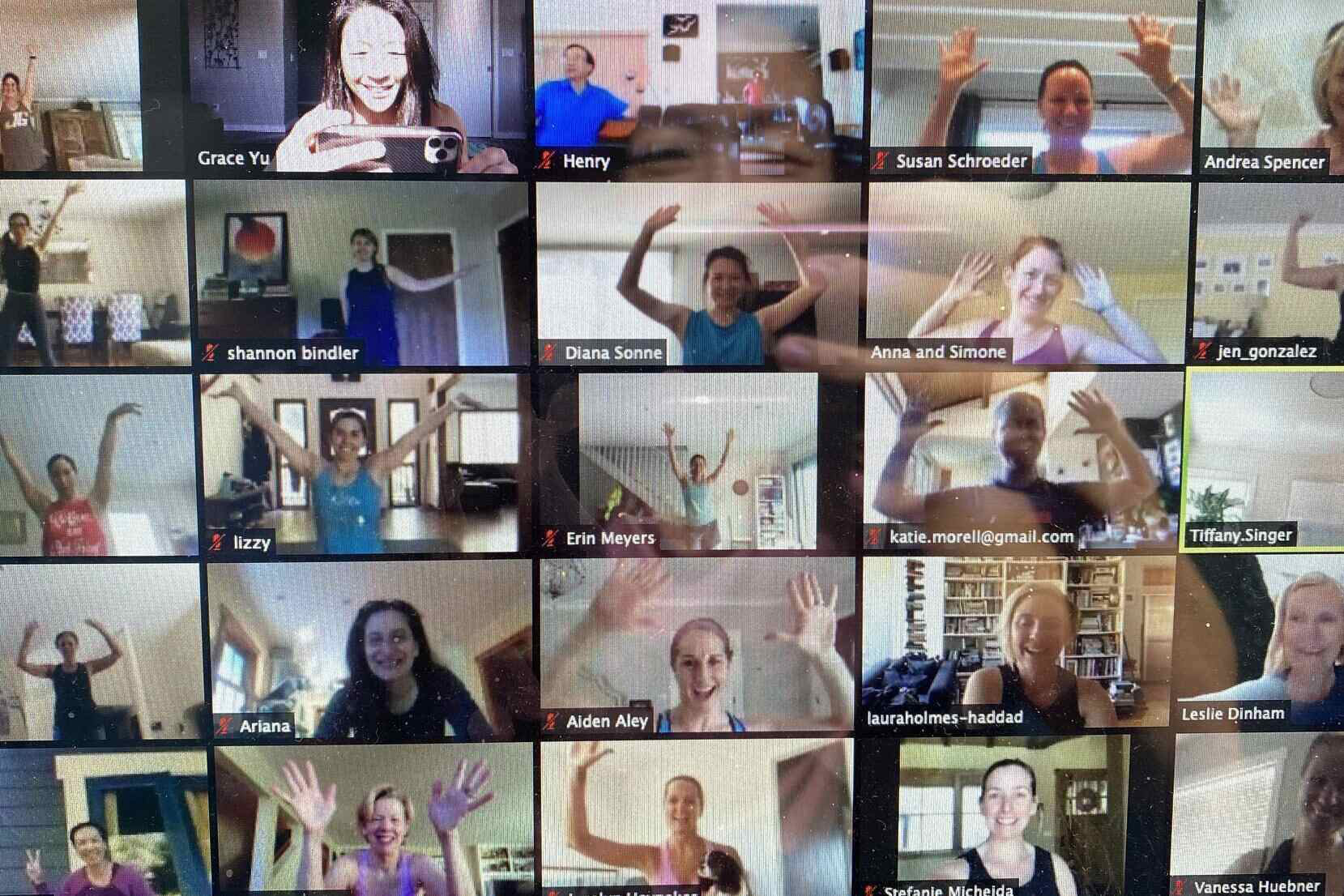 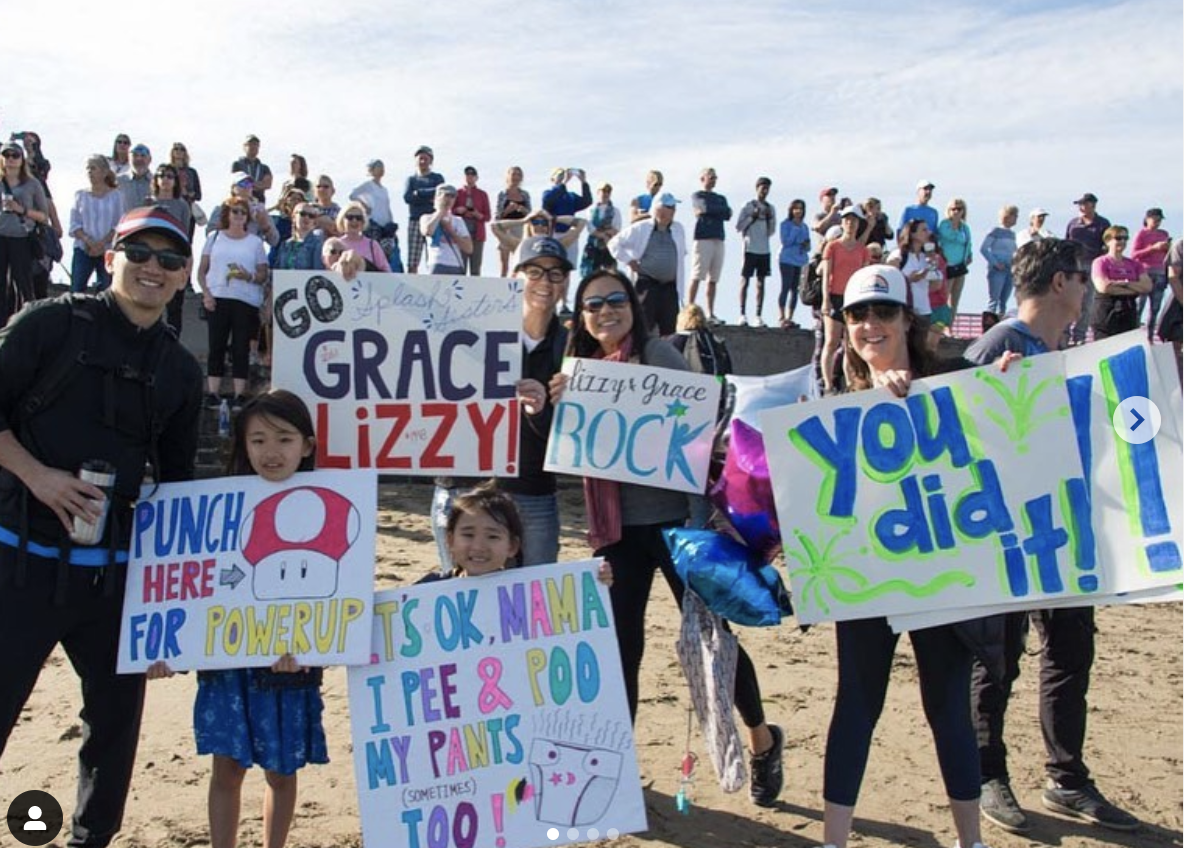 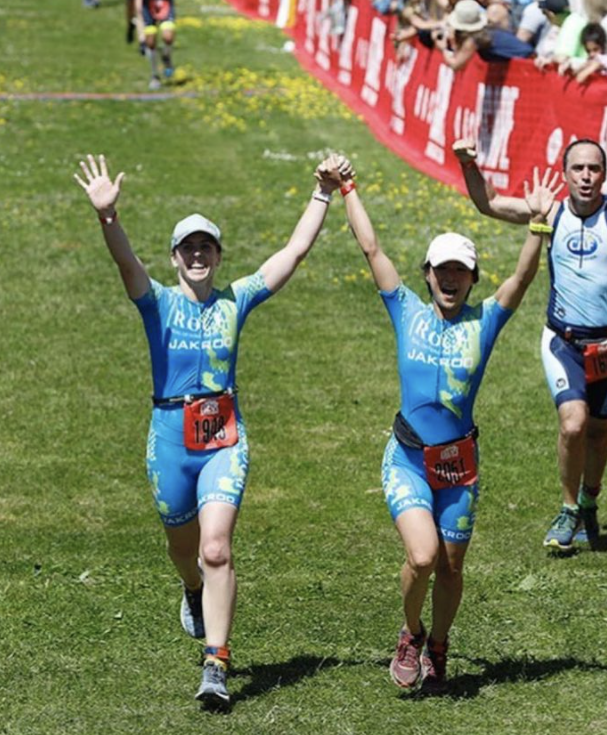